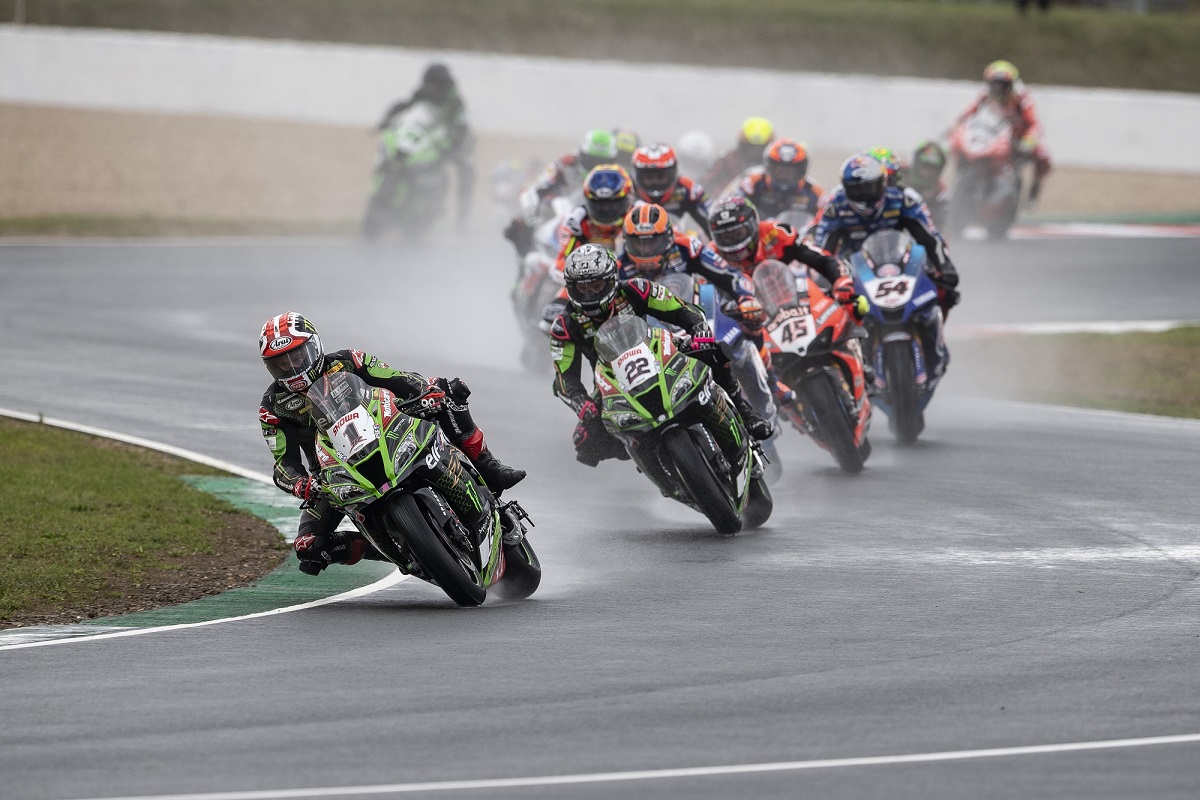 Thrilling wet race at Magny-Cours won by Jonathan Rea after the two BMW riders crash out from first and second on Lap 1.

Thrilling action up and down the grid was the order of the day during race one for the seventh round of the 2020 MOTUL FIM Superbike World Championship at Franc’s Magny-Cours circuit. Wet conditions greeted the 21 riders for the opening race, with Jonathan Rea (Kawasaki Racing Team WorldSBK) claiming his 10th victory of 2020 as he inches closer to title number six. .

Drama started at turn one as both Tom Sykes (BMW Motorrad WorldSBK Team) and teammate Eugene Laverty retired from the race on the opening lap; Laverty was taken out by a falling Sykes after the British rider was hit by Garrett Gerloff (GRT Yamaha WorldSBK Junior Team).

The incident left Rea, Loris Baz (Ten Kate Racing Yamaha) and Gerloff battling for victory after Gerloff fell back following a mistake at turn five. Gerloff recovered to third place but a crash at the turn 6-7 Nürburgring chicane forced him to retire; the American star taken to the medical centre for a check-up. It meant Rea and Baz duelled it out for victory with Rea coming out on top by around three seconds while Baz secured his first podium at Magny-Cours. Alex Lowes (Kawasaki Racing Team WorldSBK) finished in third place as he secured his first podium since the Australian round.

Chaz Davies (ARUBA.IT Racing – Ducati) followed up his victory at Catalunya with fourth at Magny-Cours, continuing his strong season end. The Welshman finished ahead of the battling trio of Toprak Razgatlioglu (PATA YAMAHA WorldSBK Official Team), Leon Haslam (Team HRC) and Scott Redding (ARUBA.IT Racing – Ducati). Redding finished in fifth place ahead of Razgatlioglu in sixth after Haslam passed Razgatlioglu into turn 12 before crashing straight after; Haslam retiring from the race.

Samuele Cavalieri (Barni Racing Team) finished the race in 16th; equalling his best result of his races in the 2020 season with Takumi Takahashi (MIE Racing HONDA Team) rounded out the classification in 17th place, with Haslam, Gerloff, Sykes and Laverty all retiring from the race.

P1 Jonathan Rea (Kawasaki Racing Team WorldSBK): “I felt pretty good out there straight from the get-go, but to be fair Loris and Garrett and Alex were in the group and the pace was incredible. Doing 48, 48, 49, 48. Every time I saw my dashboard, I thought I’d be able to get a gap but they were right there. It was a really fun race, Loris pushed me right to the end. He made a small mistake, I think, with five or six laps to go.”

Jonathan Rea moves one step closer to a historic sixth title and a record 100 victories after taking the Superpole Race win.

More rain fell at the Circuit de Nevers Magny-Cours for the Tissot Superpole Race as the challenging Pirelli French Round continued with more thrills and spills in the MOTUL FIM Superbike World Championship with Jonathan Rea (Kawasaki Racing Team WorldSBK) leading a Kawasaki 1-2 finish ahead of teammate Alex Lowes.

Rea had started from third place but assumed the race of the lead by Turn 2 and from there he took a commanding victory for his 99th WorldSBK win in his 300th race in the category. Lowes finished in second place as KRT finished first and second in the Superpole Race; Lowes securing his second podium of the weekend. Michael van der Mark (PATA YAMAHA WorldSBK Official Team) completed the podium with the Dutchman bouncing back from a Race 1 crash to secure his seventh podium of the season.

Scott Redding (ARUBA.IT Racing – Ducati) moved up the grid from tenth place to finish in fourth with the British rider putting van der Mark under pressure in the latter stages; the duo battling into Turn 15 on the final lap with van der Mark coming out on top. He finished four seconds clear of teammate Chaz Davies, with Loris Baz (Ten Kate Racing Yamaha) completing the top six.

The BMW Motorrad WorldSBK Team duo, Eugene Laverty and Tom Sykes, had started the race from first and second but finished out of the points; Laverty down in 15th and Sykes in 20th after taking a trip through the pitlane, while Federico Caricasulo (GRT Yamaha WorldSBK Junior Team) crashed out of the race at turn 15.

Rookie Scott Redding fights from fourth on the grid to take victory as he takes the title fight to the final round of 2020.

The fight for the 2020 MOTUL FIM Superbike World Championship will head to the season finale as Scott Redding (ARUBA.IT Racing – Ducati) claimed victory from fourth on the grid in race two at France’s Magny-Cours circuit with Jonathan Rea (Kawasaki Racing Team WorldSBK) finishing in fourth after starting from pole position.

After winning the midday sprint, Rea had led from the start of race two before Redding had made his way to the front battle. The Ducati rider passed Rea on the fourth lap of the 21-lap race to take charge, dominating the race through to the flag and securing a valuable 25 points in the championship battle. Redding was joined on the podium by Loris Baz (Ten Kate Racing Yamaha) as the home hero claimed his second podium of the French round, with Chaz Davies (ARUBA.IT Racing – Ducati) competing the podium.

Davies made the title-denying pass on lap 14 as he pushed Rea down into fourth place, meaning Rea leads Redding by 59 points with 62 points available in the remaining three races. Rea had tried to fight back in the latter stages of the race to secure the championship at Magny-Cours but Davies was able to stay ahead.

P1 Scott Redding (ARUBA.IT Racing – Ducati): “I was on the back foot all weekend because I didn’t have the laps on the rain tyres, but I was getting faster and faster. With the setting of the bike that was holding me back a little bit, I said to the team that if we could get this fixed, I think I can fight for the win. From the first and second lap, I saw I had the pace. The second problem was how long would the Pirelli last in these conditions as I had no idea. I was trying to ride as smooth as possible but in the end I did everything to win today.”

Andrea Locatelli wins after race-long battle with Lucas Mahias ahead of an epic four-way battle for the podium in wet Race 1; Yamaha win Manufacturers’ Title.

Soaking wet conditions provided dramatic action up and down the FIM Supersport World Championship grid as the rain fell in France with Andrea Locatelli (BARDAHL Evan Bros. WorldSSP Team) and Lucas Mahias (Kawasaki Puccetti Racing) duelled it out in a race-long battle for victory in the Pirelli French Round at the Circuit de Nevers Magny-Cours.

Locatelli started the race from a season-low fourth place on the grid but quickly made it up to the front of the field as he took the lead on the opening lap, with Mahias just behind. Locatelli and Mahias were able to pull out a gap to the riders behind as they duelled it out for victory across the 18-lap race, with Locatelli taking the race win ahead of Mahias; the Italian securing his 11th win of the season. Locatelli’s victory means Yamaha have now secured the 2020 Manufacturers’ Title for WorldSSP.

Hannes Soomer (Kallio Racing) was able to take his first podium of the season, and career, despite starting the race in 16th place and take the first podium for Estonia in WorldSSP. The Estonian battled his way through the field and joined the battle for third place early in the race, finishing ahead of Raffaele de Rosa (MV Agusta Reparto Corse), Kevin Manfredi (Altogoo Racing Team) and Can Öncü (Turkish Racing Team).

De Rosa, Manfredi and Öncü were separated by just under a tenth when a Red Flag was shown on the final lap after Glenn van Straalen (MPM Routz Racing Team) crashed, with the trio unable to take their fight to the line; with Manfredi being the highest placed WorldSSP Challenge rider in the race.

Kyle Smith (GMT94 Yamaha) had been in the podium fight but suffered two crashes as he showed rapid pace throughout the race; he first crashed on Lap 6 at Turn 15 and was able to re-mount. He then was able to fight his way back into podium contention but crashed at Turn 1 on Lap 12 as he caught the train and retired from the race.

A long-awaited victory for Lucas Mahias (Kawasaki Puccetti Racing) came to an end in Race 2 for the Pirelli French Round in stunning fashion as he claimed a dominant victory at the Circuit de Nevers Magny-Cours; the Frenchman claiming a home victory as his first FIM Supersport World Championship win of 2020.

Mahias started the 18-lap race from second place but immediately leapt to the front of the field and instantly pulled out a gap to the rest of the field as he searched for his first victory of the season. The Frenchman finished well clear of second-place Kyle Smith (GMT94), who had started from pole position, as Smith secured his second podium of the 2020 season. Hannes Soomer (Kallio Racing) backed up his first WorldSSP podium in Race 1 with a third-place finish in Race 2; the Estonian taking advantage of Can Öncü (Turkish Racing Team) crashing out on Lap 15 at Turn 15 although the Turkish rider was able to re-join the race.

Steven Odendaal (EAB Ten Kate Racing) finished in fourth place after a late-race battle with Kevin Manfredi (Altogoo Racing Team); South African rider Odendaal ahead of Manfredi when the Italian went down on the final lap, but he was able to recover to tenth place. It meant Czech rider Karel Hanika (WRP Wepol Racing) secured a top five position, ahead of Manuel Gonzalez (Kawasaki ParkinGO Team). 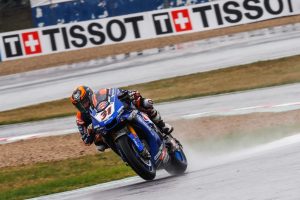 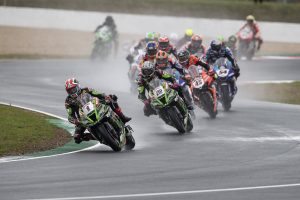 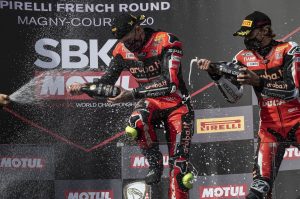 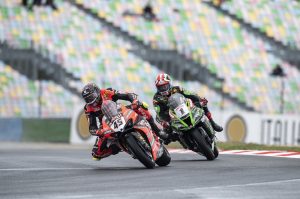 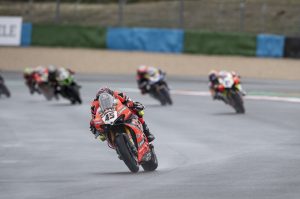 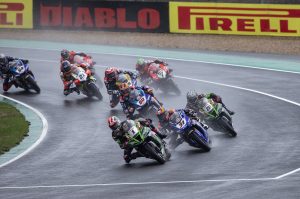 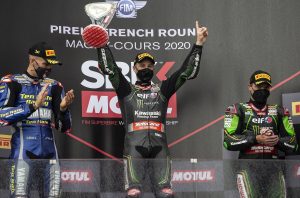 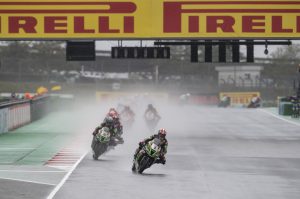