Australia has successfully defended the International Challenge winning the three-nation battle for historic bikes at Phillip Island’s Grand Prix circuit today at the Island Classic, with the locals’ 704 point haul securing victory over rivals America (691 points) and the UK third with 423 points.

Albury’s Alex Phillis was the star performer – claiming two wins, a second and a third across the four six lap races – to lead the Australian effort and be awarded the best individual performer on the grid aboard his Suzuki 1260.  He won the Ken Wootton trophy with his 157 point haul (2-1-1-3), an early birthday present for the racer who turns 26 tomorrow.

Just behind was Melbourne polesitter Jed Metcher who produced four podium places (3-2-2-2) on his Yamaha FJ to amass 155 points, racing at the front of the pack throughout the meet to make a major contribution to the Australian victory.

But it was far from an easy Australia Day victory, with the Americans taking it to the Aussies in every race.  Their major nemesis was Californian ace Josh Hayes – a multi AMA champ – who at 43, still possesses the speed and competitive grit that has seen him amass 83 career wins across many classes over a brilliant motorcycling career.

Hayes had his work cut out from him for the literal start – thanks to engine issues in qualifying relegating him to grid position 7 for each race and a testing third row start.

It was only his second visit to Phillip Island, but he came out fighting early to win the first race and capped off the weekend with victory in the fourth battle. In race two and three, he campaigned at the front and returned a 5th and a 3rd to be the top performing American and finish with an individual tally of 154 points.

Phillis, son of multiple Australian champ, Robbie Phillis was thrilled with his Individual Ken Wootton win, as well as the national victory for the Rex Wolfenden led team.

“It’s a huge privilege to win it.  I remember Ken at the track from when I was running around as a 4 year old, he would always be there. It’s crazy to come away with something like this!,”

“I’ve been to this event every single year since 2006 since dad was riding, I’ve only ridden three times and every year we’ve had a chance at the overall, and last year we came close with 3rd, but honestly I wanted it really bad and it showed in my riding. It’s awesome to come here and win such a prize.”

While the Australians took the win at their home circuit, congratulations also went to the Dave Crussell captained Americans.  Some had never experienced the demanding Australian track and were learning its high speed demands and fast-flowing corners as the weekend went on.

On either side sat Australians, 2019 winner Steve Martin on his Katana who took fourth overall (5-4-4-7), and rounding out the top ten Vincent Irving rider Beau Beaton and veteran Shawn Giles on the Suzuki Katana.

Australian David Johnson, the 2018 winner, had a weekend he would prefer to forget and only completed the first race with a 6th, before mechanical problems produced DNF’s in race two and three and no start in race four.

The best performer for the Tony Hart captained UK squad was Brendan Wilson (Suzuki Harris) who finished the weekend in 12th overall, with Damien Kavney 15th and Roger Gunn in 16th both on Suzukis.

Saturday’s front-runners continued to dominate with Australia’s Alex Phillis winning race three on his Suzuki ahead of Jed Metcher, with America’s Josh Hayes in third.

Polesitter Metcher won the start and while struggling somewhat with the front end of his Yamaha, led for the first four laps, while the melee settled behind him.

Phillis on the other hand, had a lousy start off the front-row and was pushed back to sixth by the end of the first lap.

In front of him lay Metcher, former enduro champ Steve Martin  and the formidable American trio of Larry Pegram, Josh Hayes and Michael Gilbert on their Mojo Yamahas.

Despite gearbox problems and some light rain mid-race Phillis slowly ticked them off, and by the end of lap three it was a Metcher/Phillis battle at the front with Hayes in pursuit.   Phillis took the lead going into turn three, with Metcher biting back to once again take control.   Phillis though had the top speed advantage, and took the lead on Gardner Straight to head the final laps to the flag and cross .077 in front of Metcher and seize 40 points for the Australians .

“We got a false neutral off the start and our gearbox isn’t too bad but every half the race I was jumping out of gear out of turn four and we struggled a bit. But to have the guys in front…. it sort of put a target on their back and gave me the edge I needed to find the pace fast and early in the race. So we came from far back.  If you want to win, you got to have the motivation to get there.”

With no sign of rain, race four was an epic final battle in the sun. Metcher won the start and led at the end of lap one. Rather than Phillis who was struggling with gearbox issues, it was Metcher and Hayes that set the pace.  Hayes took the lead on lap two, and despite the badgering of Metcher and Phillis, added the race four victory to his race one win and to finish the weekend with two victories, a third and a fifth.

“I knew with the sun coming out it played a little bit of an advantage for tyres with us in the Dunlop’s, and finally I got a pretty decent run off line and didn’t let Jed just go. I wasn’t trying to play catch-up for the whole race, being able to get up close to him right off the bat, I thought if I could push and pressure the pace for race distance, every lap works in my favour a little bit,”

Said Hayes after the final win.

“I made a few mistakes late in the race and they got back a little close to me, but I was just trying to be steady and just hit my marks and fortunately we had a clean race. We had four great races and I really enjoyed riding in them, with the boys (Alex & Jed) all of us together, all weekend, every race, it was so much fun! It’s good to leave on a high note!”

Historic Racing Across All Eras

Honouring a century of motorcycling in three action-packed days, the 27th International Island Classic, is one of the world’s great historic bike meets.

The winner of the Phil Irving Trophy was NSW racer, Keo Watson who returned a perfect score card 250 points –  five wins in the 500 Forgotten Era class on his 1981 Yamaha and 500 wins in the 250cc New Era Production class via his 1990 Honda.

For all times go to www.computime.com.au

Top scorer for the UK 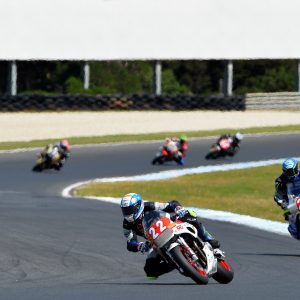 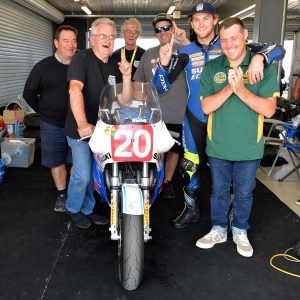 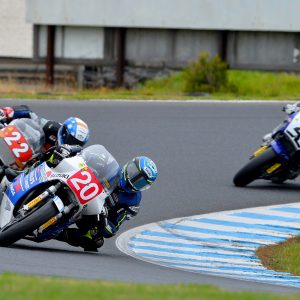 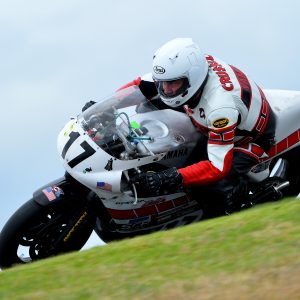 Dave Crussell in action during the weekend. Image Russell Colvin 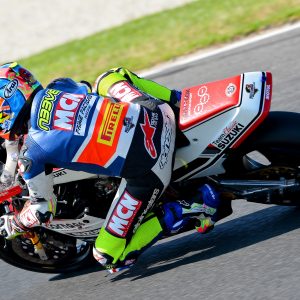 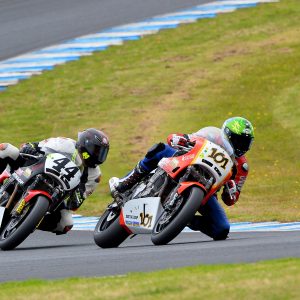 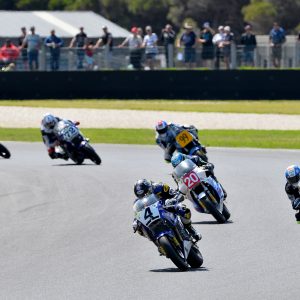 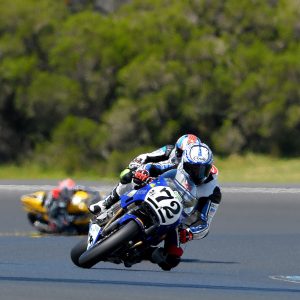 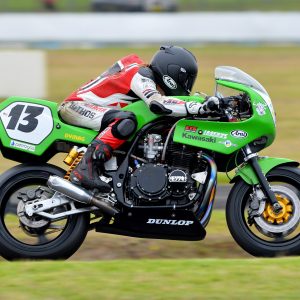 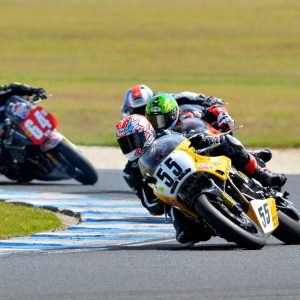 Michael Gilbert rounded out the top five overall with 140-points to his name. Image Russell Colvin

Michael Gilbert rounded out the top five overall with 140-points to his name. Image Russell Colvin 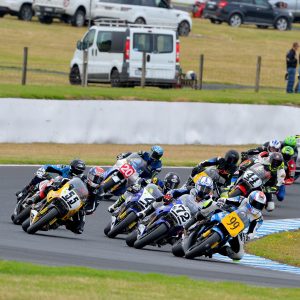 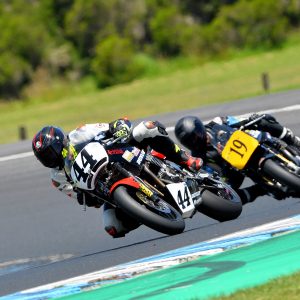 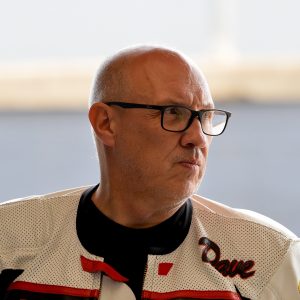