Joan Mir (Team Suzuki Ecstar) is the 2020 FIM MotoGP™ World Champion. After six podiums and a victory in the Europe GP, the Majorcan was 37 points clear coming into take two at Valencia and nothing could shake the Suzuki rider. A seventh-place finish defended to the final corner assures him the crown, with Mir becoming the first Moto3™ Champion to win the premier class title and the first to win it for Suzuki in 20 years.

Mir’s path to glory began in the Red Bull MotoGP Rookies Cup in 2013, where he took a podium as a rookie, before 2014 saw the Majorcan end the year second overall after a number of wins. In 2015 a full season in the FIM Moto3™ Junior World Championship awaited, where he came fourth overall but took four wins and a further three podiums as he fought for the title to the end. Late that same year, Mir also made his debut in the Moto3™ World Championship – qualifying fifteenth and then fighting for sixth as an injury replacement at Phillip Island. The Majorcan crashed out, but had already made an impression.

He joined Moto3™ full time for 2016 and immediately began to impress. Points first time out, a top five in his third ever Moto3™ race and then a first victory in Austria – from a first pole – saw Mir end the year fifth overall and as Rookie of the Year. That made the Spaniard a firm favourite for the title the following year and he didn’t disappoint, coming out guns blazing in 2017 to take the first two victories of the season.

More wins at Le Mans and Catalunya prefaced three victories in a row in Germany, Czechia and Austria, before another in Aragon set up the Majorcan’s first shot at the crown at Motegi. It wasn’t to be as Mir failed to score for the first time all season, but at Phillip Island he bounced back in style.

Upon his return to the venue where he made his debut only two years earlier, Mir was untouchable as he took his ninth win of the year and wrapped up the crown, becoming the 2017 Moto3™ World Champion.

Mir then moved to Moto2™ with the EG 0,0 Marc VDS team. As a rookie in the intermediate class, the Spaniard continued to impress as he took four podiums and ended the season in sixth, his trajectory and success having already called the attention of Suzuki. The Hamamatsu factory offered him a seat in MotoGP™ for the following year, and Mir accepted to join the premier class in 2019.

First time out in Qatar, the number 36 impressed on his debut and took eighth before some tougher races followed. By Mugello he was back in the points in 12th, and at Catalunya he took sixth to begin a run of solid top eight finishes. That ended at Brno with a crash before the Majorcan also crashed at the post-race test in the Czech Republic, subsequently side-lining him from the Austrian and British Grands Prix through injury.

Upon his return at Misano, Mir started scoring again and ended the year without a further DNF, taking a best result in his rookie year of fifth in Phillip Island and setting himself up for a sophomore year at the front – right at the front, as it would turn out.

In 2020 pre-season testing, Mir – and Suzuki – had many talking as the Hamamatsu factory put in some impressive performances, but fast forward a few months to Jerez as competition re-started and the duo had a tough first outing as Mir crashed out in the Spanish GP. Next time out the Majorcan took fifth to get some points on the board, before Brno saw another DNF dent his title hopes – but not for long.

From Austria onwards, everything came together. A first MotoGP™ podium in second place prefaced an impressive performance in the Styrian GP where the race was Red-Flagged with Mir in the lead, that seeing him ultimately take fourth. The Majorcan bounced back with three podiums in a row in the San Marino, Emilia Romagna and Catalan GPs, gaining traction in the Championship, before another tough race in Le Mans briefly halted his momentum as Mir took 11th, lacking experience of the conditions. With key rivals Fabio Quartararo (Petronas Yamaha SRT) and Maverick Viñales (Monster Energy Yamaha MotoGP) also fighting in the fringes of the top ten though, all was far from lost.

MotorLand Aragon was up next and Mir was immediately back on the podium, taking two third places. With the first he also took the Championship lead and arrived into the Gran Premio de Europa as now the clear favourite for the crown, but there was something missing.

That something was a first MotoGP™ win which, despite getting close, the Majorcan had not yet taken. That changed when the premier class headed out to race in Valencia for the first time in 2020 as Mir put in a sublime charge to the flag; cool, calm and collected to take a valuable 25 points and a MotoGP™ winner’s trophy – putting him 37 points clear heading into the penultimate race weekend of the season.

It was a tough Saturday in the Gran Premio Motul de la Comunitat Valenciana as he qualified 12th, but as the lights went out for his first match point, the Majorcan soon got to work to move into the top ten. Next it was the top eight, and he only needed a handful of points as his closest challengers ended up off the podium. Mir kept it pitch perfect to assure himself the crown, taking seventh place and crowning himself the 2020 MotoGP™ World Champion.

Mir has stood on the MotoGP™ podium more than any other rider this season (seven times), including a win at the European GP. This is this first time that a Suzuki rider took seven (or more) premier class podiums since Kenny Roberts Jr. in 2000 (nine).

He is only the fourth different Spanish rider to take the premier class Championship, along with Alex Criville (1 title), Jorge Lorenzo (3) and Marc Marquez (6).

Mir is the seventh-youngest rider to clinch a premier class World Championship, aged 23 years and 75 days old on race day of the Valencia GP, between Valentino Rossi (22 years and 240 days old) and Jorge Lorenzo (23 years and 159 days old).

At the French GP, Mir took his third podium in three successive premier class races, becoming the first Suzuki rider to do so since Kenny Roberts Jr. in 2000 (from Malaysia to Spain).

At the European GP, Joan Mir took his only win of the season so far, becoming the first premier class World Champion with the lowest number of wins during the season. Prior to Mir, the premier class Champions with the smaller number of wins were Leslie Graham (1949), Umberto Masetti (1950, 1952) and Nicky Hayden (2006), all of them with two wins.

Joan Mir is the first premier class World Champion without a single pole position during the season since Wayne Rainey back in 1992.

JOAN MIR: “I will probably need a shower to understand the situation! It’s something I’ve been fighting all my life, since I was ten years old I had this dream and I never stopped until I got this title. So what can I say? I can start saying thanks to a lot of people who’ve stayed with me, not only this year but also in the past, to make me who I am and achieve this result. I want to thank first my family, and then Suzuki and the opportunity they gave me in 2018, and now in 2020 two years later I’m the World Champion! I didn’t expect it honestly, I expected it further in the future! But we’ve got the title and now it’s ours, so I’m happy!”

How did he feel before lights out?

“The important thing is that I was looking calm, and looked without pressure, but I wasn’t calm and without pressure I was just super nervous, which is not a bad thing! The truth is that this year was especially difficult because we didn’t just have pressure on track but also at home to not get the virus. It was especially difficult to manage, and thanks to all my crew who managed it in the perfect way.”

When did he start to believe he could win the Championship?

“Styria was the first race where I was really competitive, fighting for the victory. Probably after Misano and Barcelona, then I thought, ‘wait, maybe I’m not only fast in Styria and I’m able to maintain this feeling with the bike!’ For me that was the moment I realised I could do it.”

And how does it feel to become the first Champion for Suzuki in 20 years, joining an incredible history?

“For me, this was the reason to sign with Suzuki. For me, to win a title with any manufacturer is unbelievable and the main target, but I was quite brave in that moment to go with Suzuki because I didn’t expect this potential with the bike in the second year, I expected it further forward. For me to win with Suzuki has something extra, not just this year, but to get a title with Suzuki means something more than normal.”

And what if, in his Moto3™ rookie year, he’d been told he’d be MotoGP™ World Champion just four years later?

“I would have said you were crazy! Race by race, year by year I was getting faster and getting used to the bike quickly and it made my progression so fast, and that was the key to take the MotoGP title in my second year. We probably sacrificed a year in Moto2, I would have liked to spend two years there but that wasn’t ideal so we took the correct decision to come up to MotoGP after my first year in Moto2.” 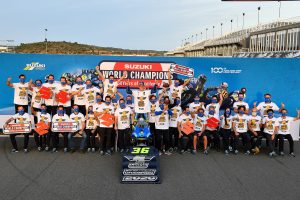 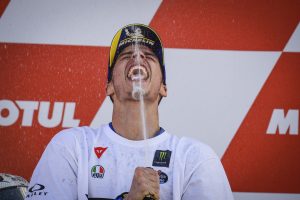 But first, a Prosecco shower

From one Suzuki Champion to another: MotoGP™ Legend Franco Uncini (left) congratulates Mir 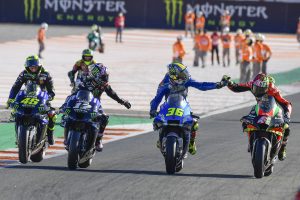 His rivals stop to congratulate Mir on the title 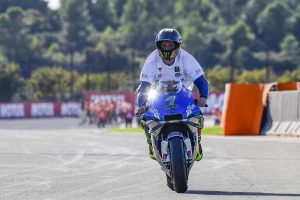 Lap of honour: Mir heads for parc ferme with the number 36 replaced with a number 1 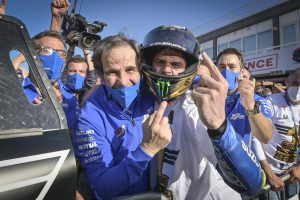 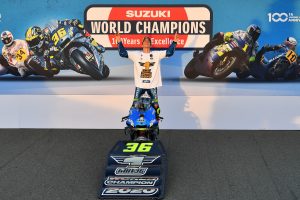 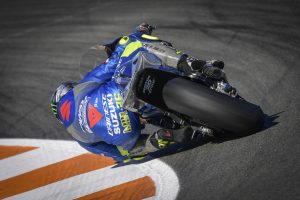 The Majorcan in action