Both boys have inherited their father’s passion and skill on two wheels, and this year 16-year-old Remy Gardner will compete in the Moto 3 class of the renowned Spanish championship (CEV Repsol).   Riding for Team Calvo on the KTM 250, Remy’s 2014 campaign begins this weekend at Jerez – the first round of an eight round title chase across Spain, France and Portugal.

Remy also plans to race in the FIM European Road Race Championship in October at Albacete in Spain, and is hopeful of scoring a handful of wildcard rides in the Moto3 World Championship as part of the goal to be racing in the title fulltime in 2015.

“I worked well with Team Calvo last season, and I am excited about this year,” said Remy on the eve of his season start.

“I’m a bit bummed out that my favourite number, 87, isn’t available but I’ve chosen number two as a replacement.

“I’ve had 87 on my bike since my first day of racing, and it is a significant number for our family as it is the year dad won the world championship. But number two is closer to one, and that is what I am aiming for.

“I’m grateful for the backing from Phillip Island.  It is my favourite track in the world. When you come over Lukey Heights, it is just an awesome experience, the best fun!  I’ve raced there twice before, in 2010 and 2011, and did pretty well, with a podium finish each year.   My dream is to win a world championship race at Phillip Island one day, just like dad did.”

“I’m excited about riding in the Copa this year. It’s a really competitive championship and is going to be much harder than anything I’ve raced in before, but I know I’ll learn a lot through the season and am so happy to be back with Team Briefing again,” said Luca, who finished third in the 2013 Mediterranean championship for Briefing Copetició.

Luca also has a love of the island.

“The first time I raced at Phillip Island I was so excited and nervous,” he said.

“I was only 11 and was on my 70cc Moriwaki. It was my second road race ever, and I couldn’t believe I was going to ride at a Grand Prix Circuit.

“I finished second overall for the weekend and was really proud.  I loved racing there and wish I could do it every weekend.  It’s also really cool to go to the karting circuit and slot cars, and seeing stuff about dad in the museum was good too.  I hope I can race there again one day soon.”

Wayne is thrilled the island has come on board to support his sons.

“Phillip Island Grand Prix circuit brings back so many fantastic memories.  For me it’s the best circuit in the world.  I have no doubt most past and current riders will agree that the thrill you get from racing around this very special circuit, in such a stunning location is unique, and can’t be replaced anywhere,” said Wayne.

“To have won the first two races there in 1989 and 1990 was an incredible experience for me, and to see how it’s grown makes me feel very proud of my history with the circuit.

“The first time I saw my boys ride down Gardner Straight was an honour, and very emotional for me, and I’m looking forward to experiencing that again, hopefully many times over.”

The Phillip Island Grand Prix circuit joins long-time Gardner supporters Alpinestars and Moriwaki and new partner, helmet brand NZI, in the boys’ quest to follow in their father’s footsteps. Both Gardners will sport the circuit logo on their leathers and promote the Victorian circuit on their European race adventures. 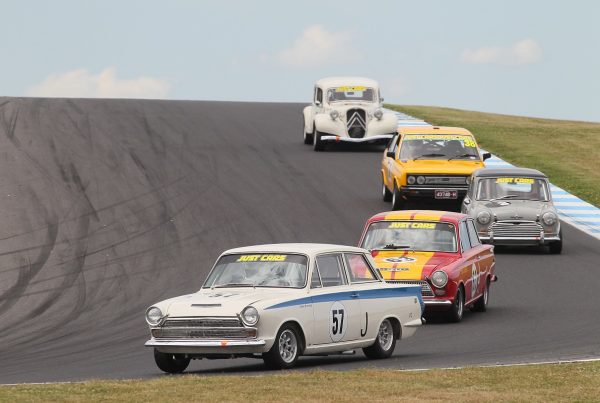