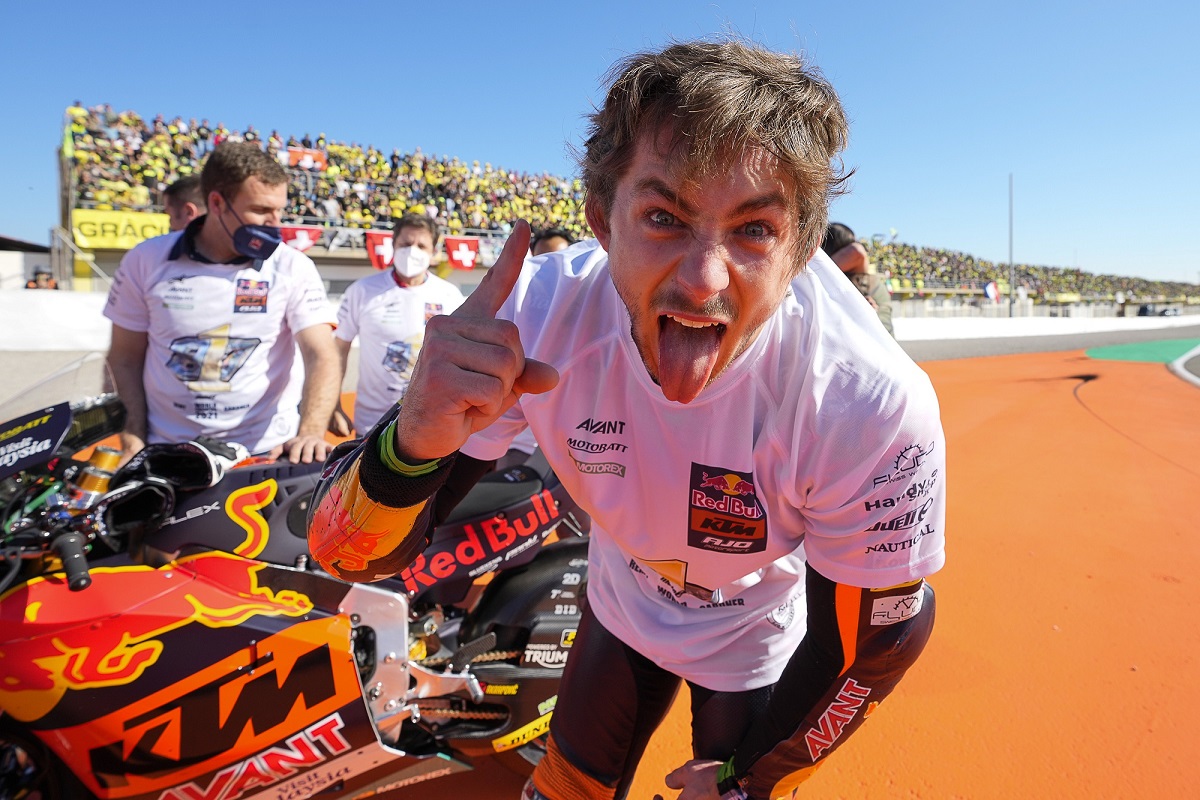 Remy Gardner is the 2021 FIM Moto2™ World Champion! Heading in with a 23-point advantage, the Australian needed to take a handful of points in the Gran Premio Motul de la Comunitat Valenciana to wrap up the crown, and that he did with a tenth place finish. After an incredible season of consistency with 12 podiums, of which five have been victories, the number 87 kept his nerve to the last to become a World Champion.

Son of 1987 500cc Champion Wayne Gardner, Remy Gardner started riding bikes early as he got his first motorcycle at the age of four. He began his career racing dirt track and long track, as a good few greats from Down Under have done before him, competing at state and national level in his native Australia.

He then switched to tarmac not long after, and his first international race came in late 2010 thanks to an invite from Honda Australia to compete at the NSF100 Trophy Worldwide Mini Bike race in Albacete, Spain. Later that same year, Gardner made his Australian road race debut at the iconic Phillip Island, winning the MRRDA Australian Nippers Championship.

The next step in his career would prove crucial as Gardner travelled to Spain to compete in the pre-Moto3™ class in the Mediterranean Championship in 2011. He came second overall, and that prefaced a full-time move to Spain for 2012. The Aussie has called the country home ever since.

Gardner entered the Moto3™ class in the CEV for the first time in 2012, finishing most races and scoring points in his debut season. In 2013 he made more progress, including taking his first top five finish at the Albacete round, and he remained in the Championship for 2014 and took another step forward, scoring points in every race he started bar one and taking his first podium.

Gardner also made his Grand Prix debut that season, racing at Misano, Phillip Island and Sepang. His final appearance at the Malaysian Grand Prix provided a milestone as the Aussie scored his first World Championship point, finishing fifteenth. The move to the World Championship came full-time for 2015, and the NSW native finished the season 30th overall aboard a Mahindra – with his home Grand Prix at Phillip Island proving a highlight as Gardner took his first top ten finish Down Under.

For 2016, Gardner then moved to bigger machinery, taking on the Moto2™ European Championship with Race Experience and, from the Catalan GP on, the Moto2™ World Championship with Tasca Racing. In the former he impressed with a top five in Race 2 at MotorLand, before signing off his participation with his first win in Race 2 in Barcelona – and by a sizeable margin.

The same Circuit de Barcelona-Catalunya also staged his Moto2™ World Championship debut, which saw Gardner come home in P15 and score a point first time out, just week before his first European Moto2™ win. Impressing with his adaptation, Gardner then remained in the Moto2™ World Championship for the remainder of 2016, taking more points at the Sachsenring with a 12th-place finish before another points-paying P13 at Sepang.

His performances earned him a seat at Tech3 Racing for 2017, and he was a regular points scorer, taking his first top ten in the Moto2™ World Championship with a ninth place at Brno. 2018 saw the Aussie take more points and move further forward once again, the progress clear despite a motocross accident ahead of the Spanish GP in which he broke both his legs. Once he was back from injury though, Gardner picked up where he left off, took his first front row at Silverstone and then ended both the season and his tenure with Tech3 in style at Valencia with his first Moto2™ top five.

2019 and 2020 added more milestones as Gardner moved to the SAG Team. In 2019 the number 87 took his first Grand Prix podium with second place at Termas de Rio Hondo, as well as setting the fastest lap, and the TT Circuit Assen saw the Australian take his first pole position. 2020 began with a top five in Qatar, Gardner took pole in Austria and by the Styrian GP he was back on the podium. However, a crash in Warm Up at Misano – where he was set to start from pole – saw the Aussie facing more injury struggles with a fracture to his left hand. He missed that race and the Emilia-Romagna GP, returning at Catalunya but only taking P16 after riding through the pain barrier. From there though, the momentum began its crescendo that would culminate in the 2021 Moto2™ crown: second at Le Mans, two top fives at MotorLand, and third and seventh at Valencia. That prefaced the season finale where, after mastering the rollercoaster as the Autodromo Internacional do Algarve joined the calendar, Gardner took his first Grand Prix win in some style: from pole and with the fastest lap.

For 2021, the rider on a roll joined Red Bull KTM Ajo and the rest is history, or likely become so. The number 87 started the season with three podiums in a row in Qatar, Doha and Portimão, before a fourth place from pole in Jerez. Le Mans was another podium, this time in second place, before Gardner won three in a row on an incredible run of form: Mugello, Catalunya and Germany, the latter of which was the 200th Moto2™ race. Another podium at Assen saw him head into the summer break with an advantage in the title fight of 31 points.

His closest rival, however, was teammate Raul Fernandez and the rookie sensation would continue to prove the key challenger as the season rolled on. Gardner came back from the summer break off the podium in both races at the Red Bull Ring as Raul Fernandez took another win in the second, not going down without a fight. The Australian hit back with victory at Silverstone as his teammate crashed out, but both Aragon and San Marino saw the number 87 forced to settle for second as Raul Fernandez began a serious comeback and strung together his own run of three wins in a row – including at the Circuit of the Americas, where Gardner made his first big mistake of the season and crashed out.

And so, as the paddock returned to Misano for the Emilia-Romagna GP, the gap between the two was just nine points… but there was another twist in the tale just around the corner. Despite the race proving a tougher once for Gardner, Raul Fernandez crashed out the lead – doubling Gardner’s advantage in one fell swoop as the gap shot back out to 18 points in favour the Australian. That set up the first match point in the Moto2™ World Championship for the Algarve GP, and despite a dramatic crash on Friday that left Gardner riding a little bruised on Sunday, the Australian dug deep and took an incredible win under intense pressure from his teammate. That added another five points of advantage, making it 23 on the way in to the season finale.

After a Red Flag and restart, Gardner kept his nerve from P8 on the grid, dropping a couple of places and duelling it out in the latter half of the top ten. Raul Fernandez had to win to keep his chances alive and that the number 25 did, but Gardner stayed calm and avoided any risks near the front to come out on top in the fight for tenth – three places higher than he needed – and take a history-making World Championship crown. Wayne and Remy join Kenny Roberts and Kenny Roberts Jr as father and son World Champions.

Remy Gardner is the first Australian rider to clinch the Moto2™ title and the second to do so in the intermediate category of GP racing along with Kel Carruthers in 1969.

Aged 23 years and 263 days old, Gardner is the eighth youngest rider to clinch the title in Moto2™, behind Alex Marquez (23 years 194 days old).

Remy Gardner has won five races in 2021, three less than his teammate Raul Fernandez. However, he is tied with Fernandez as the riders most podiums in Moto2™ this season, with 12.

Remy Gardner: “It’s definitely been an intense season. Raul did an amazing job this year, as a rookie he really made me work for it for sure. It’s such an amazing season, so many podiums, great races, four wins. [Speaker: five wins]. Five wins? Five. Well that shows how much I’m keeping track. It’s been an incredible season. So many parc fermes and podiums, incredible moments with the team. There were times I’d finish second and think that was a bad day but you have to enjoy every moment. It’s been such an amazing season but intense for sure, especially the last quarter has been really intense, Raul has been so fast, I’ve made a few mistakes and he has too, but consistency was key in the end and the days when I just couldn’t win or he won, it was just about finishing and getting the points I could. Ultimately that’s what got us over the line.

“With the first race I had a pretty good first lap, after that incident at Turn 2 I got though on the inside and ended up with the front guys and I thought that would be a good opportunity to go with those guys and break up the group and have a good consistent race, then with the Red Flag everything stopped.

“I made a good start in both, the second wasn’t as good on the first lap and for the first few laps I was just hanging in there and going with the guys but it was a bit scary cause I saw there was a bit of commotion, guys were passing, Raul was going for it and I thought ‘I’m not going to put myself in the middle there, I’m going to hang back.’ Then I came under fire from the guys behind and had to pull my finger out a little bit and break up the group a bit.

“I had to push a bit harder to get away from Tetsu, he was going crazy and my teammate in the past, I know how he rides! Just tried to break up the group a bit and finish the race in a respectable position and safely. Managed to do that, keep my nerves and for sure it was a lot of pressure but I managed to bring it home.

“It hasn’t really sunk in yet to be honest. There have been so many hard years, decent success this year and even last year, I really kind of changed my chip last year and everything started to go a bit better. I didn’t have the most podiums in the world but managed to get my mind under control, everything was falling into place and I was trying to keep positive about everything. From 2015 to even 2019 they were really, really tough years for me and like I said, there were points in my career I honestly believed that was it, there was no more and that was the end of the road. Especially after injury for sure, fighting through that was incredibly difficult.”

If you told your past self you’d be 2021 Moto2™ World Champion would you have believed it?
“Probably not, no. It’s taken a turn for sure!” 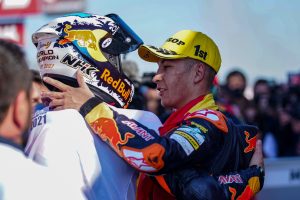 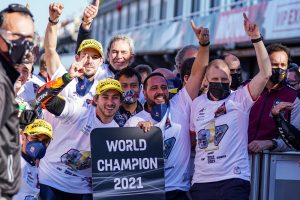 Remy Gardner celebrates with his team 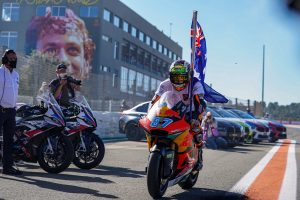 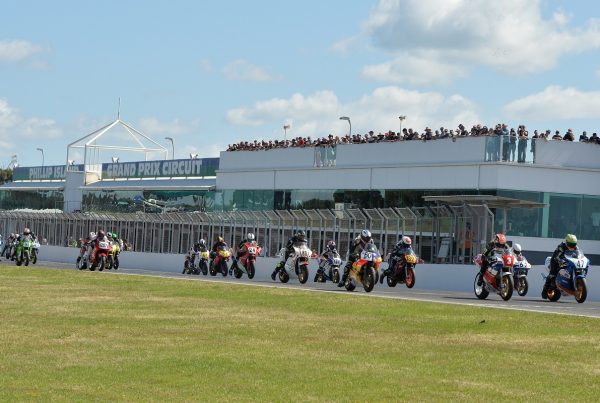