Round 3 of the 2018 Series, promises to be with a celebration of who’s who in Australian Motorsport in the 2018 CAMS Australian Endurance Championship with all the glamour of the Australian GT Cars. The meeting also features the 2018 Australian GT Trophy Series, the 2018 Porsche GT3 Challenge Cup Australia Series.

For those fans with an open wheeler taste the 2018 Jayco Australian Formula 4 Championship brings some shorter Sprint Races to the program for Australia’s future stars. The Radical Australia Cup rounds out the celebrations with twin longer distance 50 minutes races for pure Le Mans style Sports Cars.

Sunday will be headlined by the 2018 CAMS Australian Endurance Championship with a 500 kilometer Enduro which forms much of the DNA of Phillip Island Grand Prix Circuit with exotic cars, valued at more than the a small nation. Included in this international category will be Audi R8 LMS and Ultra, McLaren 650s, Mercedes GT-S GT3, Ferrari 488s, Porsche 911 GT3R, Aston Martins, Lamborghini R-EX and Hurracans, BMW M6 GT3s and some exciting GT4s, all racing 113 Laps for 500 kilometers or around three and a half hours. 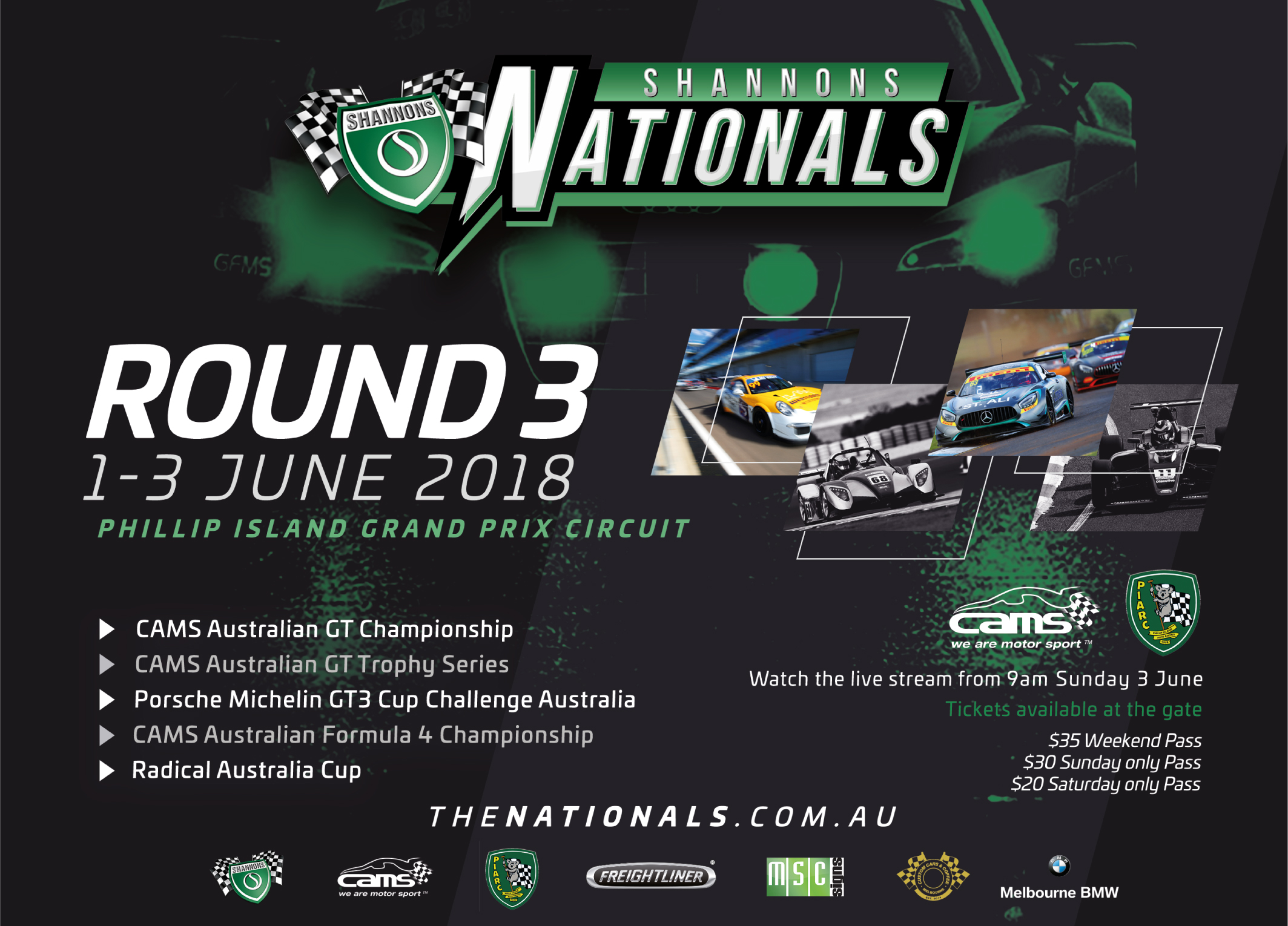 An event not to be missed, with a driving line up of stars from all categories.

The feeder Porsche Series the Porsche GT3 Challenge Cup for 2018 has many new faces with last year’s Carrera Cup 991 Cars finding a new home or at least new drivers with a desire to make a name in these fast machines as they aim for the glamour and excitement of Carrera Cup.

This series is their stepping stone to international stardom that the world wide Porsche Races and Junior Development Programs can provide, as evidenced by the International success Australia’s Matt Campbell has achieved over recent years.

The Australian GT Trophy Series provides a similar launch pad to the Australian Endurance Championship and a career in Australian and international GT Racing.

It will enjoy two 50 minute Mini Enduros on Saturday.

Sunday’s excitement is rounded out with Formula 4 and 2 fantastic 50 minute races for the Radical Australia Cup, the country’s most exciting prototype sports cars.

Come and help celebrate the 150th years of Phillip Island and 90 years of great motor racing on Phillip Islands world renown Grand Prix Circuit, where the spectator is the always a winner.

Fantastic family value with weekend passes for adults only $35.00, accompanied, kids under 15 free of charge and daily rates also available.

Don’t miss out on the free admission to the pits and paddock to view this amazing Exotic Car Show that moves.

Qualifying and racing from 9.00am each day. Daily admission available or Weekend Pass only $35.00, accompanied, kids under 15 free of charge.