>    Laverty and Sofuoglu winners at Istanbul

Laverty and Sofuoglu winners at Istanbul

Ireland’s Eugene Laverty was the star of the show in the round 11 of World Superbike Championship in Istanbul over the weekend, taking victory in the world supers and ensuring the title chase heats up for the final three meets; while world supersport’s Kenan Sofuoglu thrilled local fans by winning his home round.

In world superbike, Eugene Laverty (Aprilia Racing Team) made a clean sweep of the competition by winning both races and narrowing the gap to Tom Sykes to 26 points.   The Kawasaki Racing Team rider was third and second at the flag and leads the championship on 323 points.

Frenchman Sylvain Guintoli (Aprilia Racing Team) and Italy’s Marco Melandri (BMW Motorrad GoldBet) got one podium finish each, but lost some ground in the title chase, which sees them now sitting 8 and 33 points short of the leader.

The star of the day, though, was Turkey’s Kenan Sofuoglu (Mahi Racing Team India Kawasaki), who sent the 51,000 plus home crowd into raptures by edging Sam Lowes (Yakhnich Motorsport Yamaha) at the finish line, to win his world supersport home race. Lowes, on the other hand, is just two points away – even considering the number of race wins – to win his first world supersport title.

The eni FIM Superbike World Championship will resume at Mazda Raceway Laguna Seca in two-weeks time, while Supersport will be back on track early next month at Magny-Cours.

Race 1  Eugene Laverty does it better in race one

Eugene Laverty (Aprilia Racing Team) has won the first race of the day at the Intercity Istanbul Park, after what was a perfect performance by the Irishman. Moreover, it was the first Race 1 win – out of five overall – this year for Laverty, a crucial result for his title hopes. The factory Aprilia got in the lead during Lap 13 by overtaking Tom Sykes (Kawasaki Racing Team) and tenth by tenth he managed to pull away, while the Championship leader lost some ground and was passed by Marco Melandri (BMW Motorrad GoldBet) three laps later.

The Italian did an outstanding recovery from the third row on the grid thanks to a strong race pace but, once he managed to move up to second place, it was too late to try and catch Laverty. Meanwhile, Sylvain Guintoli (Aprilia Racing Team) began his charge to third place, but Sykes successfully defended his position up to the finish line.

Davide Giugliano (Althea Racing Team Aprilia) ended up fifth after a close battle with Toni Elias (Red Devils Roma Aprilia), that ended up with a collision between the two – with both able to stay upright – at the exit of the last turn. An almost identical situation involved Pata Honda riders Leon Haslam and Michel Fabrizio, with the Brit who managed to secure ninth place ahead of his team mate for the round.

Race 2 Laverty backs up for second win of the day

Eugene Laverty (Aprilia Racing Team) stole the show today with an outstanding performance in Race 2 at the Intercity Istanbul Park, that led to his second double win of the career – after the one achieved in 2011 at Monza. The Irishman started his charge on early leader Tom Sykes (Kawasaki Racing Team) and, after spending half of the race chasing the rival, he eventually closed the gap and overtook the factory Kawasaki Rider on Lap 12, at Turn 14. Laverty then proved he had the pace to stay in the lead and maintained a one-second gap up to the finish line, while Sykes had to settle for second place.

Factory Aprilia rider Sylvain Guintoli (Aprilia Racing Team) crossed the line a lonely third, as the Frenchman never managed to get in contention for the win. Fourth place Marco Melandri (BMW Motorrad GoldBet) had a challenging first part of the race, in which he had to make his way through a pack of hungry opponents: Toni Elias (Red Devils Roma Aprilia), team mate Chaz Davies and Davide Giugliano (Althea Racing Aprilia), who finished 5th, 6th and 9th respectively.

Giugliano, former STK1000 Champion, managed to get a good start, but he lost ground as the race progressed to end up behind Jules Cluzel (FIXI Crescent Suzuki) and Leon Haslam (Pata Honda World Superbike). Ayrton Badovini’s (Team Ducati Alstare) absence from the grid resulted in the first-ever World Superbike race with no Ducati machines on track, the second one in history with no points for the Italian manufacturer.

“My previous double-win was at Monza in 2011, but this one has a special meaning because it was totally unexpected. I am very happy as my bike was perfect, even better in the second race – despite the similar pace-  as I could make the difference in the final stages. I’m back into contention for the title, but most of all I regained confidence and that gives me great hope for the next rounds.”

“Two podiums today even though it was the first time for me here. We made two or three changes to the bike between races and I think everybody saw that our bike was working a bit better in the second one. We started that race quite strongly and I was able to lead again but some of our competitors were using the tyres a little bit better. Unfortunately I did not have the package at the end of the second race to fight back and try to win it. I believe that we can learn and improve from this weekend.”

Kenan Sofuoglu (Mahi Racing Team India Kawasaki) and Sam Lowes (Yakhnich Motorsport Yamaha) put up a superb fight today in the World Supersport race at the Intercity Istanbul Park. The two riders, who had been battling heat-to-head for the win in almost every round contested so far, managed to give the vocal and ecstatic Turkish crowd something to remember. In the end, after swapping positions for countless times, the home hero managed to score an historical win: Lowes tried everything he could to snatch victory over the finish line, eventually finishing behind his rival for just fourth hundreds of a second.

Based on today’s results, Lowes is now ever-closer to his first World Supersport title, as he is leading the standings with 49 points over Sofuoglu, with just two races left in the season. Michael van der Mark (Pata Honda World Supersport), who was up front in the early stages of the race, could not keep the pace of the front runners and finished third ahead of team mate Lorenzo Zanetti.

Roberto Rolfo (ParkinGO MV Agusta Corse) did an outstanding recovery from 14th place on the grid, eventually ending up fifth, followed by Roberto Tamburini (Team Lorini Honda), Kev Coghlan (DMC-Lorenzini Kawasaki) and David Salom (Intermoto Ponyexpres Kawasaki). Rolfo’s team mate Christian Iddon had to pull out the final stages due to a technical problem, after spending most of the race in the top-5. 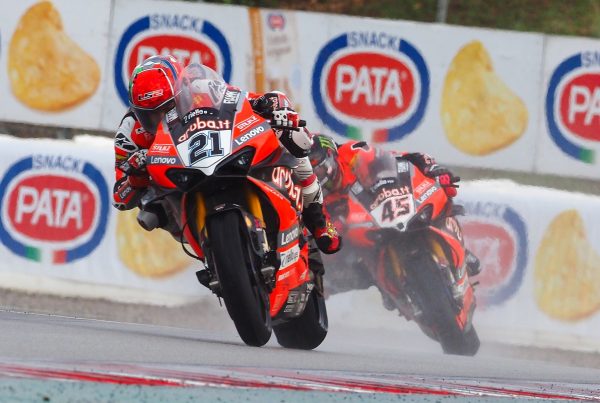 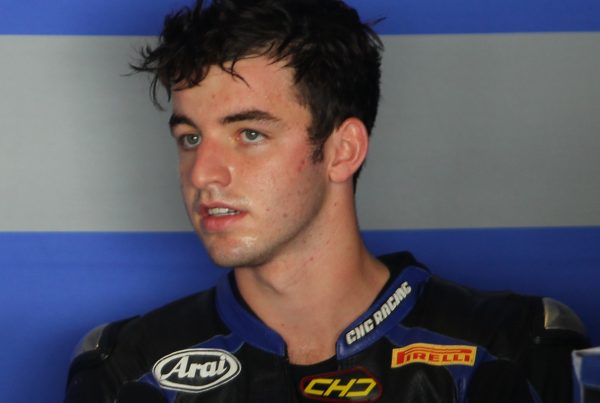 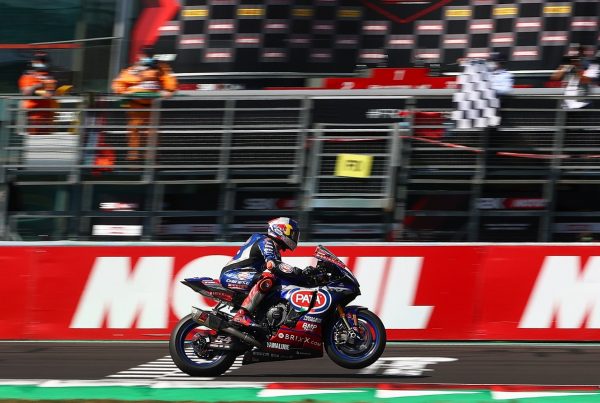