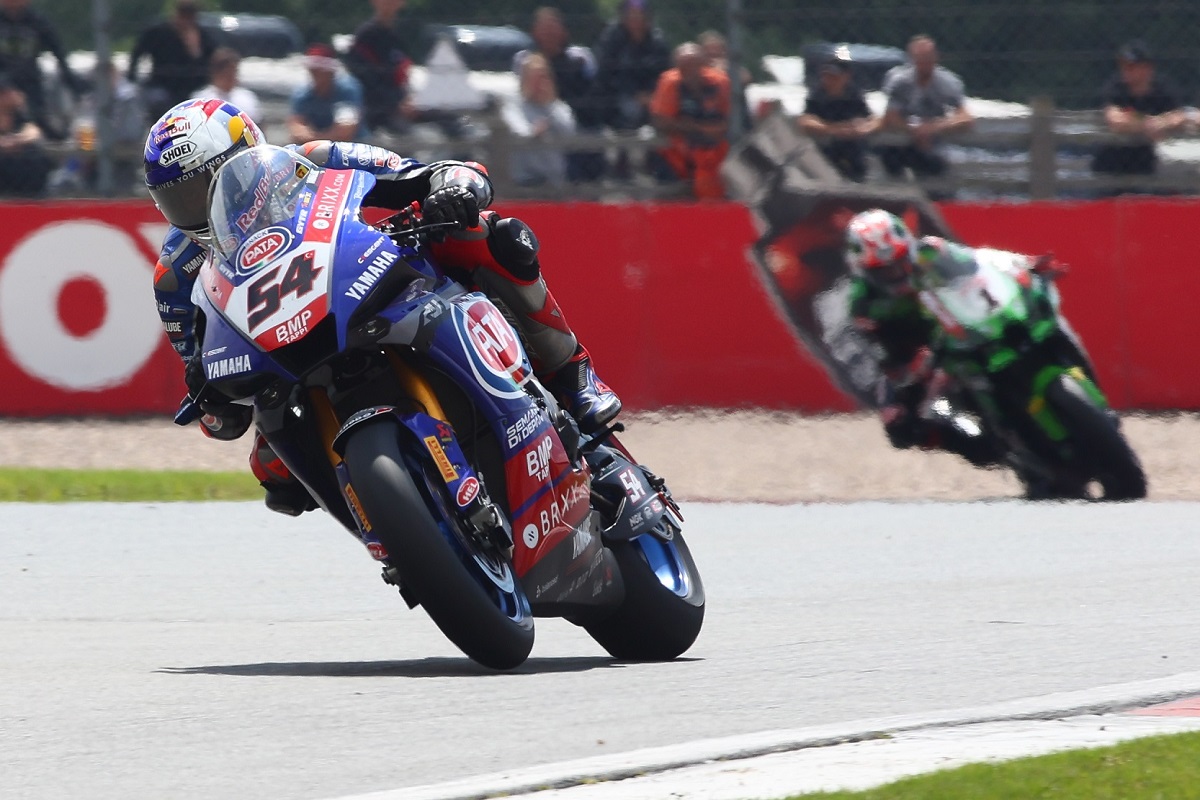 A stunning first lap from Yamaha rider Toprak Razgatlioglu catapulting him from 13th place to the lead on his second lap, set the scene for the Turkish gun to secure his second victory of the 2021 MOTUL FIM Superbike World Championship at the UK circuit of Donington, overnight.

LIGHTS OUT AND TOPRAK MAKES MOVES

Jonathan Rea (Kawasaki Racing Team WorldSBK) led the field away from pole position in the opening race of round four, but it was Razgatlioglu who caught the eye at the start, moving from 13th to fifth by turn one and up to second by the end of lap one. It did not take long for Razgatlioglu to take the lead of the race as he passed the six-time champion on the second lap.

A rare error from Rea on lap three allowed Razgatlioglu to build a gap of three seconds to the defending championship and continue the race unhampered. Victory to the Turk and a valuable 25 point haul, sees his close in on Rea – lagging the six time world champion by just 15 points.

THE BATTLE FOR THIRD

Behind the two leaders who had broken away, an epic battle for third was brewing between Michael van der Mark (BMW Motorrad WorldSBK Team), teammate Tom Sykes, Alex Lowes (Kawasaki Racing Team WorldSBK) and Garrett Gerloff (GRT Yamaha WorldSBK Team). Van der Mark was running in third place and looked to make a move on Rea for second after his trip through the grass, but found the reigning champion pulling way while Sykes started closing in at the front of the chasing group.

As Sykes closed in on his teammate, Lowes was on the rear of Sykes’ M 1000 RR as both he and van der Mark searched for BMW’s first podium with the new bike. Lowes made his move at Melbourne Hairpin on Sykes to move up the order, while the two BMWs were battling, with van der Mark falling down the order behind Lowes and Gerloff.

Sykes and van der Mark both gained a position when Gerloff came off his Yamaha YZF R1 at the final corner on his own, with the American able to remount his bike and fight back to finish in seventh. It meant Lowes claimed third place after the titanic battle ahead of the BMW duo of Sykes and van der Mark; with two BMWs finishing inside the top five.

Leon Haslam (Team HRC) came home in sixth place ahead of Gerloff after the American’s crash -with Gerloff 16 seconds back from the British rider. Next was Alvaro Bautista (Team HRC) in eighth, who was passed by Gerloff during the American’s fightback. Lucas Mahias (Kawasaki Puccetti Racing) put in a solid race to come home in ninth place. The lead Ducati in the race was Axel Bassani (Motocorsa Racing) who completed the top ten after yet another impressive performance from the youngest rider on the 2021 WorldSBK grid. Chaz Davies (Team GoEleven) came home in 11th as he searches for his 100th WorldSBK podium, finishing four seconds behind Bassani.

Scott Redding (Aruba.it Racing – Ducati)’s home race came to an early end after he crashed at turn four, with Christophe Ponsson (Alstare Yamaha) also crashing at the same corner not long after; both riders retiring from the race. Andrea Locatelli (Pata Yamaha with BRIXX WorldSBK) was another retirement after he suffered a huge crash on lap seven of the race although the Italian was able to walk away. Spanish rider Tito Rabat (Barni Racing Team) suffered from a technical issue on lap 14 that forced him out of the race. Jonas Folger (Bonovo MGM Action) retired from the race after being lapped by race winner Razgatlioglu.

A pre-race shower made the track wet but, like yesterday, it dried out quickly which meant a tyre gamble for those on the grid with the majority of riders using Pirelli’s intermediate tyres. Rea got the best start from pole position while Tom Sykes (BMW Motorrad WorldSBK) and teammate Michael van der Mark appeared to get swamped, with Alex Lowes (Kawasaki Racing Team WorldSBK) moving into second place.

Lowes was applying pressure to teammate Rea but a crash on the second lap allowed both BMW riders back through with the pair engaging in a battle with Leon Haslam (Team HRC) and Garrett Gerloff (GRT Yamaha WorldSBK Team); Sykes and van der Mark able to hold on to take BMW’s first double podium since Nurburgring 2013 in Race 2, and the 40th race with BMW riders on the podium. It means Sykes claimed his first podium in 645 days, the last coming at Magny-Cours in 2019, and the first podium for van der Mark since Estoril 2020 and his first since switching to the BMW factory outfit.

Haslam and Gerloff finished in fourth and fifth despite the pressure being applied to the BMW riders, with all four riders separated by just 1.5 seconds. Toprak Razgatlioglu (Pata Yamaha with BRIXX WorldSBK) was unable to repeat his stunning start from yesterday but came home in sixth place to secure a second row start for Race 2 after starting the Superpole Race in 13th.

Lucas Mahias (Kawasaki Puccetti Racing) secured his best ever WorldSBK result with seventh place to take a third row start for Race 2 ahead of Chaz Davies (Team GoEleven) and Andrea Locatelli (Pata Yamaha with BRIXX WorldSBK) in ninth; Locatelli bouncing back from a huge crash in Race 1 to secure points in the Superpole Race.

Tito Rabat (Barni Racing Team) had a crash at Turn 8 which forced him to retire from the race; Rabat starting on a wet front tyre, just one of a handful of riders who used the full wet tyres. Scott Redding (Aruba.it Racing – Ducati) started on front and rear wet tyres and it was a gamble that did not pay off for the British rider, as Redding found himself tumbling down the order as those on intermediate tyres found considerably more pace. Both Christophe Ponsson (Alstare Yamaha) and Loris Cresson (OUTDO TPR Team Pedercini Racing) both brought their machines into the pits after opting to start on wet tyres.

He’s been biting at the champ’s heels for a fair while, and eventually it was Toprak Razgatlioglu’s weekend with the young PATA Yamaha rider clinching the championship lead at round four of the MOTUL FIM Superbike World Championship after two Donington Park victories in race one and two. Kawasaki’s Jonathan Rea, won the Sunday sprint race but in race two, he crashed out from the lead of the race just one lap after passing Razgatlioglu and ended up last. Razgatlioglu leaves Donington with the championship lead on 183 points – holding a two point break over Rea (181 points) – with world superbike action now moving to the Dutch round of Assen from July 23-25.

BATTLE FOR THE LEAD AND A RARE REA ERROR…

The pressure was on from the start of race two, with Rea able to defend his lead from his nearest rivals until Razgatlioglu came charging through in the early stages of the 23-lap race.
Razgatlioglu made his first master move on the defending champ on lap four at the right-hander of Coppice, taking the lead. Despite losing out to Razgatlioglu, Rea kept the pressure on, with Rea having a near-miss with the Turkish star under braking into the Foggy Esses.
Rea’s intensity paid off and on lap ten Razgatlioglu made a mistake at Coppice and ran wide on his Yamaha YZF R1, and Rea shot back into the lead. But just a single lap later Rea found himself in the gravel at Coppice and tumbled out of the points, re-joining the battle in 20th place on lap 11 where he remained, racing the back of the field, to come in last.

Sykes found himself under a lot of pressure in the latter stages of the race from Scott Redding (Aruba.it Racing – Ducati) as the British rider bounced back from a difficult weekend in his first home, missing out on a podium by less than a second.

Dutchman Michael van der Mark (BMW Motorrad WorldSBK Team) was unable to convert a front row start into a podium finish but came home in fifth place after a strong weekend for the BMW outfit and their brand-new M 1000 RR machine, finishing more than a second clear of Alex Lowes (Kawasaki Racing Team WorldSBK) who rounded out the top six.

Chaz Davies (Team GoEleven) finished in seventh place despite carrying a knock on his shoulder following a crash at Misano last time out, finishing two seconds clear of Michael Ruben Rinaldi (Aruba.it Racing – Ducati) in eighth place. Team HRC duo Leon Haslam and Alvaro Bautista rounded out the top ten with ninth and tenth respectively; Haslam had started from fourth while Bautista battled his way up the order from 16th place.

Luke Mossey (OUTDO TPR Team Pedercini Racing) missed out on his second points finish of the weekend by just a few seconds behind Laverty, with Spanish rider Isaac Viñales (Orelac Racing VerdNatura), Christophe Ponsson (Alstare Yamaha) and Loris Cresson (OUTDO TPR Team Pedercini Racing) all finishing ahead of Rea after his crash. Jonas Folger (Bonovo MGM Action) was the first rider to retire in the early stages of the race when he brought his BMW M 1000 RR into the pitlane.

Toprak Razgatlioglu: “Normally, Donington Park is a favourite track because in 2018 and 2019 I got two podiums with second. This year, I took two victories. I’m really happy because we were also quick on Friday, and just focused on the win because I needed to win at this track. I normally like Assen and also I’m not looking at the Championship points because I’m always focussed on the race.

“This morning, in the Superpole Race, was not good because I tried my best but finished sixth on the intermediate tyre. I say ‘I hope for dry conditions in race two’ because for me race two was important, because I need good points for the championship. In the race, for me, it wasn’t easy because every lap I was pushing for the win. I followed Jonny because the racetrack grip was not like yesterday, three times I lost the front tyre. He made a big mistake, he crashed, and after I just tried for consistent lap times.”

WorldSBK was the only category to take to the track at Donington Park. WorldSSP and WorldSSP 300 classes will resume action in Assen at the Prosecco DOC Dutch Round, 23-25 July. 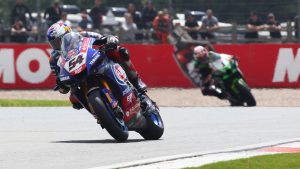 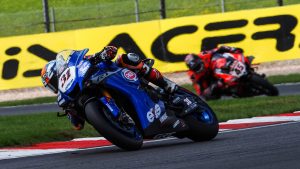 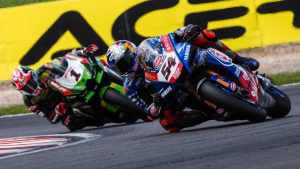 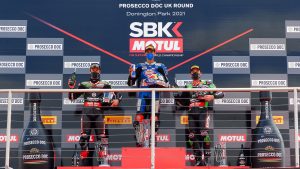 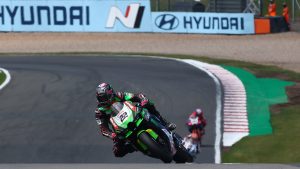 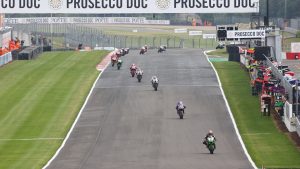 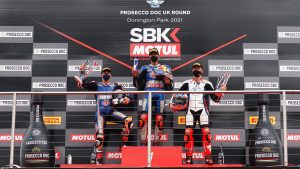 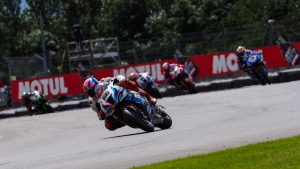 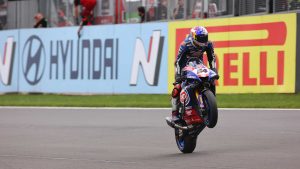